The perfect blend of technology and craftsmanship, performance and efficiency, innovative design and precision engineering, the New Ford Mondeo is designed to inspire.

The Ford Mondeo Titanium Hybrid Electric car is the pioneer in new technology. It is available as an advanced Hybrid Electric Vehicle; the first ever to be manufactured by Ford of Europe. This exciting model benefits from the combination both electric and petrol power. Using it’s improved systems such as ‘Brake Coach’ it is able to maximise this car’s efficiency and power.

This exciting new model is available to test drive at Bridgend Ford any day of the week. We do prefer you to book an appointment before making the trip down to make sure it is available for you. With the alloy foot pedals, perforated leather steering wheel, dark headliner as well as premium front and rear velours floor mats, we know that you will enjoy a ride to remember.

An image of refinement

With its flowing lines, low roofline and bold detailing: this is a sleeker, more predatory and more aggressive looking Mondeo altogether. Striking: definitely. Sophisticated: undoubtedly. The interior is equally uncompromising, a fusion of cutting-edge design and technology, with meticulous craftsmanship and attention to detail.

Technology and the art of parking

Active Park Assist technology does more than steer you into parallel parking spots: Park Out Assist (POA) helps you pull out of them too. The Perpendicular Parking (PPA) system also helps you into perpendicular spaces, sensing if your car can fit, then reversing you in. And if there are any obstructions, Side Parking Aid (SPA) warns you. 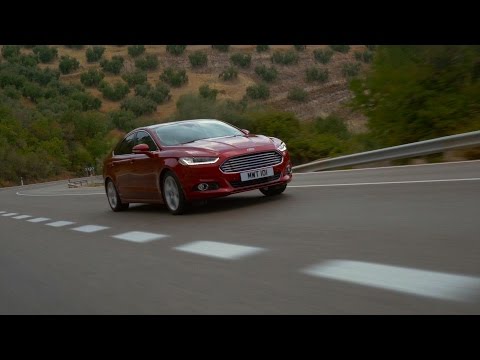 Added protection for your passengers

In a New Mondeo, the two rear outer seats can be fitted with a unique safety feature: Rear Inflatable Seatbelt. In the event of an impact, the belts inflate and spread the crash forces over five times more area of the body than conventional seat belts. By reducing pressure on the chest and better controlling head and neck movement, this innovative technology is designed to reduce the likelihood of injury.

Headlamps that help you see round bends

Ford Dynamic LED headlamps aren't just striking, they're smart. Rather than traditional bulbs they use LEDs, which project an intensely bright, natural light that's closer to daylight. The headlamps precisely follow the road as you turn the wheel, improving visibility and safety. They even adjust their lighting pattern, depending on speed and conditions.

Ford SYNC 2 with 8" Colour touchscreen lets you control your music and calls on your mobile via a colour touch-screen, or by using simple voice commands. The system even reads your incoming texts aloud, adjusts the climate control and operates the navigation system (where fitted).

Take a closer look by using our interior and exterior tours

Model shown is for illustrative purpose only

Enter your registration and mileage to get a free valuation. Release the value of your vehicle.
Back
Book A Service
Vehicle Valuation
Compare Saved Vehicles
Top
Close
Your Cookie Settings
Select your cookie settings
Strictly Necessary Strictly Necessary cookies are essential to let you move around the website and use its features, such as accessing secure areas, shopping baskets and online billing. These cookies allow our website to provide services at your request.
Performance Performance cookies collect information about how you use our website e.g. which pages you visit most often, and if you experience any error messages. They also allow us to update our website to improve performance and tailor it to your preferences. These cookies do not collect any information that could identify you - all the information collected is anonymous. They will not be used to target adverts to you on other websites.
Functional Functionality cookies are used to remember the choices you make, e.g. your user name, log in details and language preferences. They also remember any customisations you make to the website to give you enhanced, more personal features.
Targeting Targeting cookies collect information about your browsing habits to deliver adverts which are more relevant to you and your interests. They also measure the effectiveness of advertising campaigns.
Save Settings
Cancel Changes

Your settings will take affect when you refresh the page or move to a new page. Find out more about cookies